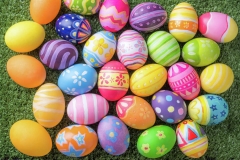 At a Texas elementary school on Thursday, a parent dressed as the Easter Bunny handed out Easter eggs – some of which contained condoms – the Austin Independent School District (AISD) told parents in a letter.

The egg-cloaked condom giveaway was neither sanctioned nor planned by the school, Gullett Elementary School Principal Tammy Thompson says in her letter to parents, explaining that the parent was asked to leave the school grounds, Fox 7 Austin reports, quoting the letter:

“This afternoon during dismissal, a Gullett parent visited campus dressed as the Easter Bunny and handed out plastic eggs. Some of those eggs contained candy, and some students were also given unopened condoms.

“Please know that this was not a planned event, nor sanctioned by the school, and we have spoken with the parent about the inappropriate nature of their activity. We value parent participation and always request that you work with campus staff to best support our students.”

“’It was an incredibly careless and inappropriate action of a parent, to put it kindly,’ an AISD spokesperson told CBS Austin.

“Currently, the youngest students in Austin ISD aren’t even learning anything related to ‘human sexuality and responsibility.’ K-2 lessons are on hold as the district works to revise lessons based on recent legislation,” KXAN reports.