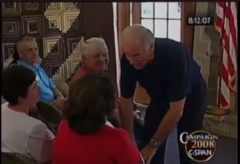 “Well isn’t this interesting,” Sen. Melissa Melendez (R-Calif.) said Friday, tweeting out video of 2007 presidential candidate Sen. Joe Biden (D-Delaware) warning against the danger of pulling U.S. troops out of Iraq before first removing the “billions of dollars of weapons” the U.S. military had in the country.

At an August 12, 2007 campaign event in Winterset, Iowa, Biden warned that the billions of dollars of weapons left behind – such as those left behind by the U.S. military’s hasty withdrawal from Afghanistan this year – would end up being used against America:

“It will take a year to get the American troops out. Do you hear me, now? That’s the truth.

“It will take a year to get them physically out.

“Now, if you leave all the equipment behind, you might be able to do it in seven months.

“Then, you leave those billions of dollars of weapons behind you that, I promise you, are going to be used against your grandchild and mine, someday.”