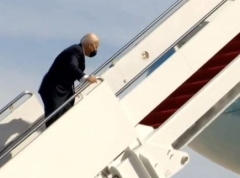 Visiting West Point for a commencement ceremony last September, Biden claimed to be more agile and vigorous than Trump. "Look at how he steps and look at how I step,” Biden urged.

“Watch how I run up ramps and he stumbles down ramps," Biden added, throwing in his customary, “Come on!” for emphasis.

Three months earlier, liberal media outlets like CNN seized upon Trump's "slow and halting descent down a ramp" at West Point to accuse the 74 year-old president of being too old for the job.

On Friday, however, it was Biden who stumbled, multiple times, as he tried to run up the stairs. As CNSNews.com reported, video footage shows Biden leaving Marine One and walking a short distance across the tarmac to the stairs leading up to Air Force One. As he tries to climb those stairs, he falls three times.