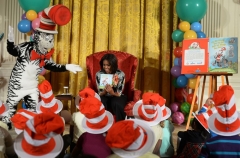 On Monday, CNSNews.com reported that six of Seuss' books have been discontinued due to complaints by those who suddenly find the books offensive.

But, at a White House gathering in 2015, Pres. Obama, an African-American, said that “pretty much all the stuff you need to know” about how to treat others can be learned from Dr. Seuss, Fox News reports:

The then-president said in 2015 that "pretty much all the stuff you need to know is in Dr. Seuss" while speaking to a group of White House interns, emphasizing Seuss' message of inclusivity written into many of his children's books and naming "The Sneetches" and "Horton Hears a Who" as examples.

"We're all the same, so why would we treat somebody differently just because they don't have a star on their belly?" he asked the group. "If I think about responsibility, I think about Horton sitting on the egg up in the tree while Lazy Mayzie's flying off, doing whatever she wants. Know what I mean?"

"I've been quoted saying this sometimes. Most of what you need to learn you can actually just, read Dr. Seuss," he said, again naming "The Sneetches" as an example. "It's all pretty much there."

“First lady Michelle Obama celebrated Dr. Seuss' birthday Tuesday by reading ‘The Cat in the Hat’ to a group of children wearing red-and-white-striped stovepipe hats like the book's main character.”

“Some of the first family’s favorite children’s books are ‘Horton Hatches the Egg,’ by Dr. Seuss and ‘Where the Wild Things Are,’ by Maurice Sendak, Mrs. Obama said in response to one of the children’s questions.”