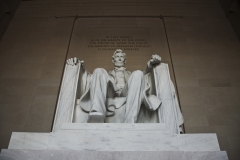 The national historic site where Pres. Abraham Lincoln was assassinated is asking Americans if there is a more “useful,” “complex” or “realistic” way to memorialize Lincoln than by displaying statues of him “on a pedestal.”

Via a tweet posted Saturday featuring a Library of Congress photo of a statue of Lincoln on a pedestal, the official twitter page for Ford's Theatre National Historic Site, National Park Service (@FordsTheatreNPS) asked readers to come up with better ways “to think about” the late president:

“Do you ever feel we, as a nation, put Abraham Lincoln ‘on a pedestal’? What do you think might be a more useful, more complex, or more realistic way to think about or memorialize the 16th president?”

Pres. Lincoln was shot and killed by actor and Southern sympathizer John Wilkes Booth while the president was attending a play at Ford’s theater on April 14, 1865, five days after Confederate General Robert E. Lee surrendered his troops. While Lee’s surrender essentially ended the Civil War, Booth and his fellow conspirators had hoped the South could still win.

Ever since, Americans have honored Pres. Abraham Lincoln for freeing slaves via his Emancipation Proclamation and for maintaining the union in the face of the Confederate states’ attempt to secede.