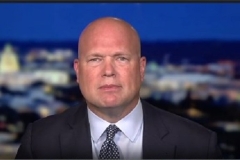 The Justice Department (DOJ) can “lower the temperature” of the anger against the department for its raid of former President Donald Trump’s home, by simply releasing the affidavit used to justify the raid and answering the public’s questions, former Acting Attorney General Matt Whitaker said Tuesday.

In a typical case, the affidavit wouldn’t be released until charges are filed, “But, in this case, this affidavit needs to be released” in an act of transparency, Whitaker explained in an interview with Fox & Friends First:

“This investigation has run its course. They’ve obtained the documents. There are no further steps that I can imagine that they’re going to take, based on the crimes that they allege to be investigating.

“So, based on everything I know about this case, it is time to release this affidavit in an abundance of a desire for transparency and making sure that the American people understand what the government is doing in their name. “

“The ball’s really in the DOJ’s court” to lower the temperature of public reaction, by being transparent, Whitaker said. And, to do so, the DOJ needs to answer the public’s questions about why, for the first time in the nation’s history, it raided the home of a former president, Whitaker said.

Pres. Trump has said, through his attorney, that he neither supports nor opposes the release of the affidavit.