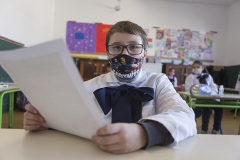 A significant percentage of parents with children in schools (K-12) that have required masks be worn during the current school year say that the masks have hurt their kids, in one way or another, a new national survey reveals

The POLITICO-Harvard survey polled parents whose children attended school in person in the current school year who were, for at least part of the year, subjected to a mask mandate. It was conducted from March 1 to March 7, 2022. Results are presented in a report titled, “CONFLICTING VIEWS AMONG PARENTS ABOUT THE IMPACT ON THEIR CHILDREN OF CONTINUING MASK MANDATES IN SCHOOLS.”

Parents were asked how the school mask requirements affected their children in four areas:

School mask mandates are most likely to have been dropped in areas where a significant percentage of parents believe their children have been harmed, according to the report:

Republican parents are much more likely than Democrat parents to believe that wearing a mask hurts their children in each of the four domains, the survey finds.

Among Republican parents, majorities believe that making their children wear a mask at school harms them in the following ways:

In each of these four areas, a majority of Democratic parents believe wearing a mask has made no difference.

However, among independent parents, half (50%) believe wearing a mask at school has hurt their children’s social learning and interactions (50%), while 45% think it has hurt their general schooling experience. Forty-one percent (41%) say it hurts their children’s mental and emotional health and 41% thinks it’s detrimental to their kids’ education.

“This is significant because independents are often important in the outcome of elections,” the report concludes.