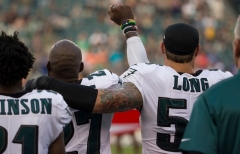 National President of the Fraternal Order of Police (FOP) Patrick Yoes responded Thursday to news reports revealing that the National Football League’s (NFL) “Inspire Change” initiative has funded organizations that promote “defunding the police” and that envision a world “without prisons, policing, prosecution, surveillance or any form of detention or supervision.”

“Maybe Commissioner Goodell should take a timeout and reconsider this decision, especially since they’re “paying for campaigns to keep criminals and offenders on the streets” while, at the same time, they’re relying on police to protect the NFL’s players and stadiums, Yoes says in a statement posted on FOP’s website and Twitter page:

“I find it incredibly ironic that NFL teams travel and play every week under the protection of local law enforcement; we have officers in stadiums, parking lots, and even on the sidelines to ensure the safety of the players, team personnel, and of course, the fans.  The NFL pays for this security because they want their venues and attendees to be safe.  Now, we learn they are sending thousands of dollars to groups whose mission is to end policing and our system of justice.

“How irresponsible is this?”

“Performative displays of wokeness like this are shameful,” Yoes says.

And, when the FOP met with the NFL to ask the league to help unite police officers and the communities they protect, the NFL refused, Yoes reports:

“Rather than supporting efforts to further divide police officers from the communities they protect, the NFL should focus on how to heal the wounds in these communities by collaborating with the FOP to rebuild trust and respect between police officers and the people they serve.

“To this end, the FOP reached out to the NFL and had several meetings to explore this kind of cooperation, but the NFL ultimately refused.”