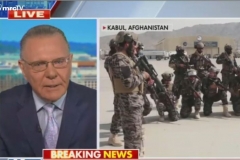 Reacting to President Joe Biden’s Tuesday speech defending his management of the U.S. withdrawal from Afghanistan, General Jack Keane (Ret.) said that Pres. Biden is misrepresenting facts, blaming others and refusing to admit his own mistakes.

Gen. Keane, a former vice chief of staff of the Army and chairman of the Institute for the Study of War, told Fox News Channel Host Martha MacCallum that Biden used the speech to try to shirk responsibility for the “national disgrace” he caused:

“Yeah, well, somehow, he’s making a very strong defense of the decision-making process to withdraw our troops, and quite an emotional one at that. But, why don't we all feel good about this?

“Nobody in America that I have spoken to feels good about anything that’s happening here. This is a national disgrace that’s taken place here.

“And, given the misrepresentation of the facts, the blame game that continues to go on, not admitting the serious mistakes that have been made here, it’s likely going to take a congressional commission or major congressional investigation to determine just who did what when and hold people accountable. Because, that’s not happening here.”

Concerning Biden’s misrepresentation of the facts, Gen. Keane said that Pres. Biden had ignored the advice of both his military and intelligence advisers who were concerned about America’s security:

“A couple of facts. One, it is a fact that the president blew off the military advisers and his intelligence advisers about withdrawing out of Afghanistan. They wanted to stay.

“The CIA director, his CIA director, said that, if the Taliban takes over, the significant risk to the United States will be there because of safe havens now back in Afghanistan today. So, that's true today. That’s the risk we have today. Out of the mouth of his CIA director.”

Gen. Keane said that Pres. Biden not only misrepresented former Pres. Trump’s conditions-based deal with the Taliban, but also “blew off those conditions, just like he blew off the military advice and intelligence advice,” in order to set an arbitrary withdrawal deadline of August 31:

“So, if those conditions were not met, Biden looked at that and just blew those conditions off. Just like he blew off the military advice and his intelligence advice. And, then set an arbitrary date of 31 August. And, what did that to? That denied the Afghan security forces getting intelligence and robust air support to stop the major offensive which was already ongoing.

“He's blowing all of that off, misrepresenting what took place and, again, denigrating the Afghan security forces that suffered 66,000 casualties over 20 years. 45,000 of which, when we stopped ground combat operations.”

“There needs to be some accountability here for what has taken place and it's not going to come from this administration,” Gen. Keane concluded.