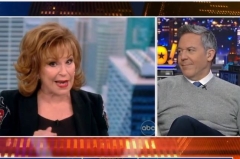 While Musk has been vilified by liberal media for cancelling free lunches, comedian/commentator Gutfeld sided with him, while simultaneously taking a shot at Joy Behar, co-host of the rabid, left-wing talk television show, “The View”:

“But, Musk making a sound business call made it even more evil. One Democrat activist wrote, ‘He fired three-fourths of the employees. Now, he’s planning to starve the rest of them,” Gutfeld noted, responding, “Yeah, they’re all going to die because their bosses won’t cover their sushi.”

“And what does Elon know about business, anyway? I mean, he’s just the world’s richest man – unlike some unemployed, 32 year-old activist moaning on Twitter about food,” Gutfeld continued.

“Even more, Musk is willing to ask seemingly-obvious questions that no one ever had the guts to ask. Does that remind you of anyone?

“Yeah. When Trump was in office, he would question everything, from trade with China to the water pressure of showers.”