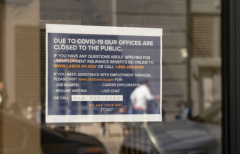 Hispanics’ unemployment rate suffered the steep rise despite a decline in the number participating in the work force and a drop in Hispanics’ labor force participation rate, from 67.1% to 63.3%, the BLS reported Friday.

Only two months earlier, in February, Hispanics 68.1% work force participation rate hit the highest mark in a decade (68.1% in March of 2010),

Likewise, April’s 18.9% unemployment rate is only seven months removed from the record low of 3.9% set in September of 2019.