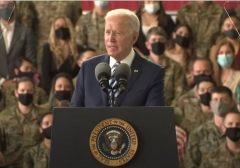 Speaking to members of the U.S. Air Force and their families at a base in England, President Joe Biden told the crowd that he keeps forgetting that he’s president.

Biden had just been introduced to the audience at RAF Mildenhall in Suffolk by 14 year-old Sydney Glascock, a daughter of two service members. As he began to praise Glascock’s stage presence, Biden realized that the crowd was still standing at attention, waiting for permission to be seated.

“At ease,” Biden said, before admitting his forgetfulness, before continuing to commend Glascock:

“When I was 14 years old, I would have been, I mean this sincerely, scared to death to stand up in front of a microphone in a large crowd or a small crowd.”

As president, Biden also serves as commander-in-chief of the U.S. military and had just been introduced as such by Glascock:

“Ladies and Gentlemen, let us welcome our commander-in-chief, the president of the United States, Joe Biden.”