First Lady Jill Biden is getting roasted for comparing the Latino community to “breakfast tacos” on Monday.

Speaking at the annual conference of UnidosUS (formerly, National Council of La Raza) in San Antonio, Texas, Biden attempted to praise the Latino community by comparing it to “breakfast tacos”:

“Raul [Yzaguirre] helped build this organization with the understanding that the diversity of this community — as distinct as the bogedas (sic) of the Bronx, as beautiful as the blossoms of Miami, and as unique as the breakfast tacos here in San Antonio — is your strength.”

Once again, Dr. Jill Biden butchers the Spanish language in furtherance of pandering to a client constituency (the org FKA National Council of La Raza). I hereby bless your timelines with Dr. Jill's rendering of "bodega". pic.twitter.com/Z4FSXtlUMe

Sen. Marco Rubio (R-Florida) changed his Twitter profile picture to that of a taco, in response to the First Lady’s characterization of Latinos, tweeting out the hashtag #NewProfilePic.

“We are not tacos,” the National Association of Hispanic Journalists tweeted, rebuking the First Lady for reducing Latinos to stereotypes:

“NAHJ encourages @FLOTUS & her communications team to take time to better understand the complexities of our people & communities. We are not tacos. Our heritage as Latinos is shaped by various diasporas, cultures & food traditions. Do not reduce us to stereotypes.”

If a Republican had misspoken in this way, he would’ve been hit with “Breathless hysteria from the [liberal] media mob” for days, perhaps weeks, Fox News Host Sean Hannity said, comparing Biden’s gaffe to those frequently made by her husband, President Joe Biden. 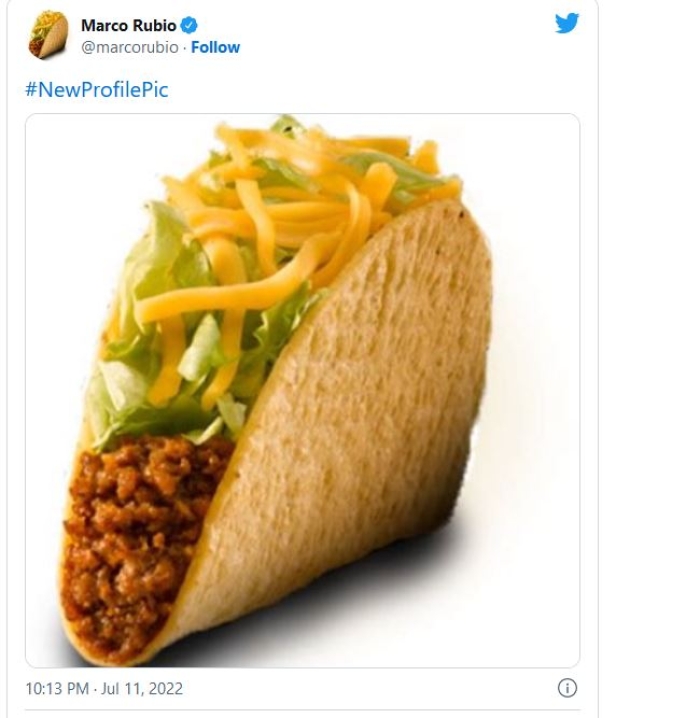