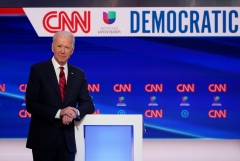 Staff members of Democrat presidential candidate Joe Biden and his running mate, Sen. Kamal Harris (D-Calif.), have been supporters of the Minnesota Freedom Fund (MFF), which pays the bail of people arrested in Minneapolis, where riots and looting have devastated local businesses.

A May 3, 2020 article published by U.S. News, via Reuters, reported that more than a dozen Biden staffers had contributed to the MFF:

“At least 13 Biden campaign staff members posted on Twitter on Friday and Saturday that they made donations to the Minnesota Freedom Fund, which opposes the practice of cash bail, or making people pay to avoid pre-trial imprisonment. The group uses donations to pay bail fees in Minneapolis.”

“Biden campaign spokesman Andrew Bates said in a statement to Reuters that the former vice president opposes the institution of cash bail as a "modern day debtors prison.”

The claim that “Campaign staffers for U.S. Democratic 2020 presidential candidate Joe Biden contributed to a bailout fund for protesters arrested after the police in-custody death of George Floyd” was confirmed to be “True” by the liberal fact-check website, Snopes.

An August 27, 2020 article published by The Post Millennial reported that, in June, Sen. Harris urged her supporters to contribute to MFF in order to help suspected rioters arrested in Minneapolis:

“In June, Harris advocated for the public to fund bail for arrested suspects implicated in the George Floyd riots in Minneapolis.

“‘If you’re able to, chip in now to the @MNFreedomFund to help post bail for those protesting on the ground in Minnesota,’ Harris had tweeted at the beginning of that month.

According to the Minneapolis station Fox 9 report:

“A Minnesota nonprofit has bailed out defendants from Twin Cities jails charged with murder, violent felonies, and sex crimes, as it seeks to address a system that disproportionately incarcerates Black people and people of color.”

“Among those bailed out by the Minnesota Freedom Fund (MFF) is a suspect who shot at police, a woman accused of killing a friend, and a twice convicted sex offender, according to court records reviewed by the FOX 9 Investigators.”