Kamala Harris Omits ‘Creator’ and Right to ‘Life’ from ‘Life, Liberty and the Pursuit of Happiness’ Quote 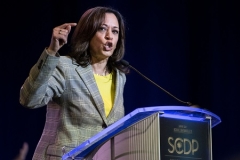 In a pro-abortion speech decrying last year’s overturning of Roe v. Wade, Vice President Kamala Harris omitted the right to life being endowed by the Creator when she quoted the Declaration of Independence.

Speaking at a nightclub and concert venue called The Moon on Sunday, Harris invoked the Declaration while attempting to frame abortion as a right:

“A promise we made in the Declaration of Independence: that we are each endowed with the right to liberty and the pursuit of happiness.”

However, according to the Declaration of Independence, “life” is also an inalienable right – and Americans possess all three rights because they are “endowed by their Creator”:

“We hold these truths to be self-evident, that all men are created equal, that they are endowed by their Creator with certain unalienable Rights, that among these are Life, Liberty and the pursuit of Happiness.”

Harris then appears to suggest that the rights have not been endowed by a Creator:

“Be clear.  These rights were not bestowed upon us.  They belong to us as Americans. And it is that freedom and liberty that enabled generations of Americans to chart their own course and decide their own future with, yes, ambition and aspiration.”