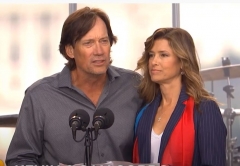 The left is “out for blood” in its effort to debase and degrade language in order to render it useless, Actor and Conservative Filmmaker Kevin Sorbo and his wife, Author Sam Sorbo said in a radio interview at CPAC on Friday.

By distorting the meaning of words like “fascism,” the left seeks to rob language of meaning, creating a society where violence, not words, becomes the only means of resolving conflict and disagreement, Sam Sorbo told Host Larry O’Connor:

“We are in a war, as much as we don’t want to be, because the left is out for blood. And that’s why I wrote the book ‘Words for Warriors,’ because the left has taken fascism and made it right wing. There’s nothing right-wing about fascism.

“And, we need to stop them in their tracks. They have to stop taking our language and debasing it and degrading it and making it useless.

“And, their plan is: if they can make language useless, what’s the next step after language? It devolves into violence. What do we tell our kids: use your words, use your words, right, don’t hit, use your words. We always try diplomacy first before we go to war, right?”

“Kevin just got digitally assassinated by Facebook” for posting his conservative views, she said.

“They know where I stand; they don’t like that,” Kevin Sorbo explained, noting that had been banned from Facebook, even though he had not violated any Facebook rules.

Still, conservatives can’t afford to resign themselves to the left’s takeover of media because “Apathy is the biggest killer out there” Conservatives need to “get out there and fight” on social media even if they don’t have a large following, Kevin Sorbo said:

“We need to be as passionate and hungry as the left is – but, not in the same angry, divisive way they are. I think apathy is the biggest killer out there. A lot of people on the right go, ‘Oh, what are we going to do? They own all the networks, they own all the media.’

“You may not have five hundred thousand followers, but I don’t care if you have five or ten, because that just multiplies on itself. People need to get out there and fight.”

Kevin Sorbo stars in the film "Rise of the Climate Monarchy: Climate Hustle 2"." Sam Sorbo is the author of "Words for Warriors."