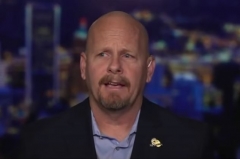 “Commit crimes and you'll be out faster than officers can finish the report,” Los Angeles Detective Jamie McBride says in a message discouraging people from visiting California’s crime-ridden cities being victimized by the state’s criminal-friendly, liberal policies.

“It’s sad to say, but it’s almost safer to hang out with Alec Baldwin on a movie set than to go shopping in Los Angeles,” McBride told Fox and Friends First on Monday, in apparent reference to the fatal shooting involving a loaded prop gun that occurred on the set of a movie the actor was filming.

The detective also condemned L.A.’s liberal policies, such as “zero bail,” that enable perpetrators to commit crimes and be released from jail before officers even have time to fill out the paperwork:

“First we have to look, how did we get here? The ACLU advocated for proposition 47, which changed the sentencing guidelines. So, right now, you can literally go out, do whatever you want, commit crimes and you'll be out faster than officers can finish the report. And that's a fact. We're wondering: how many times does somebody have to be arrested here in L.A before they stay in jail?

“It's sad to say, but it's almost safer to hang out with Alec Baldwin on a movie set than to go shopping in Los Angeles right now. That's how crazy it is. It is so violent, we're telling people ‘Don't visit,’ because we don't think we can keep you safe right now. And, that's just sad to say.”

“This AOC experiment was nice; now it's time for her to go back to bartending…because she’s definitely not a lawmaker and doesn't keep citizens safe,” Detective McBride said, responding to far-left “Squad” member Rep. Alexandria Ocasio-Cortez’s (D-NY) claim that stores like Walgreens aren’t telling the truth when they say they’re being victimized by organized smash-and-grab robberies:

“AOC, is she living with her head buried in the sand? It's ridiculous. All you have to do is turn on any news channel. Even the more liberal ones are showing some of the stuff, not showing all of it, but they are.

“It’s like this AOC experiment was nice; now it's time for her to go back to bartending and doing what she does best, because, she’s definitely not a lawmaker and doesn't keep citizens safe. And there’s people like her and the rest of the ‘Squad,’ who are just clueless of what's going on in the United States.

“There's rampant crime everywhere. In fact, Los Angeles is like the movie ‘Purge.’ But, instead of 24 hours, it's like they have 365 days to commit their crimes. That's how it is in Los Angeles and San Francisco.”

“They call having bail making it a criminal offense to be poor. They call it racist. Do you see people stopping at a grocery store and doing smash-and-grabs, grabbing milk, meat, cheese, and everything? No. What you're seeing is they're going getting Rolex watches, they’re smashing jewelry stores, they’re going into Louis Vuitton stores.

“And these so-called celebrities and other politicians, so far on the left, they don't want to admit they were wrong. And so, they keep their head buried in the sand.”

“Everybody wants to be liberal until they get robbed and shot – and see how quickly they change their tune. That's what it's going to come down to,” Detective McBride said.