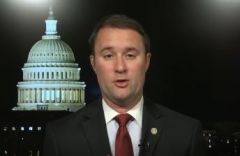 Virginia’s new Attorney General, Jason Miyares, says he’s launched investigations into the previous Loudoun County, Virginia school board and the state’s last parole board in an effort to restore accountability and transparency now that Governor Glen Youngkin (R) has been sworn in.

“You had two huge scandals that hit Virginia” while the “far-left liberal monopoly was in control the last two years,” AG Miyares said Tuesday in an interview with Fox & Friends First, citing the previous state parole board’s practice of freeing killers who had been sentenced to life in prison and the Loudoun County School Board’s handling of sexual assault in its school system:

“Well, you had two huge scandals that hit Virginia. And there has been no accountability and no transparency. You had a parole board that was literally letting out cop killers, murderers and rapists – and not notifying the family or victims.

“We’re talking about individuals that had not one, not two, but three life sentences without the possibility of parole. And, the family of the victim would find out when they would hear it on their local news. And there has been no accountability, no transparency. So, that's step number one.

“And step number two is, obviously, the tragedy that happened in Loudoun County with the sexual assault that happened in the school system. And that, candidly, traces back to when this far-left liberal monopoly was in control the last two years in Richmond that passed these criminal-first, victim-last mindset bills that said, ‘Hey we are going to end the mandatory reporting requirement of sexual assault in schools.’

“So, that's what this is about: it's about accountability and transparency in government. Something we desperately need. That was something that Glenn Youngkin ran on. Something I ran on. And from day one, within an hour of us being sworn in, we began the investigation. We are moving forward and we are excited to get to work.”

Upon taking office, Gov. Youngkin vowed that Virginians will no longer tolerate lawlessness – regardless of whether it takes place in the community or within a state agency:

“On Saturday, I fired the entire parole board and I asked the attorney general Miyares to begin an investigation into what happened.”