Majority of U.S. Voters Say Biden ‘Must Resign’ Over His Handling of Afghanistan, Rasmussen Poll Reveals 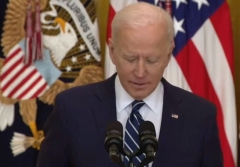 A majority of the nation’s voters agree that President Joe Biden must resign as a consequence of his handling of the U.S. withdrawal from Afghanistan.

Joint Chiefs of Staff Chair Gen. Mark Milley’s testimony this week in Congressional hearings appears to contradict Biden’s claim in an ABC News interview that his advisers had not recommended keeping 2,500 troops in Afghanistan.

“Biden lied when he told Stephanopoulos no one advised him against his timeline-based withdrawal. His recklessness resulted in the deaths of 13 US servicemembers and abandonment of countless citizens & allies. Biden can’t avoid the consequences of his actions. He must resign.”

Do you agree or disagree with this statement:   “Biden can’t avoid the consequences of his actions [in Afghanistan]. He must resign”?

A majority of 55% of voters said they agree that Biden “must resign,” including 41% who “strongly” agree. Thirty-nine percent (39%) disagree with the quote from Blackburn, with 29% strongly disagreeing.

Likewise, majorities of voters in all age groups and income categories at least somewhat agree that Biden must resign as a result of his actions.

While majorities of Republicans (82%) and unaffiliated (57%) voters at least somewhat agree that Biden must resign, only 26% of Democrats think the president should step down.

Regarding credibility, voters are more than twice as likely to believe Gen. Milley’s version of events as they are to believe Pres. Biden’s.

Fully 57% of voters say Gen. Milley is telling the truth, while only 21% think Biden is being honest. Twenty-two percent (22%) are not sure who to believe.