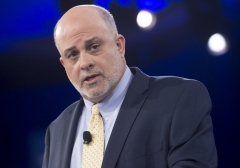 On Friday, conservative commentator Mark Levin tweeted outrage that he was being subjected to liberal propaganda by “ignorant, irresponsible individuals” on the CNN Airport Network while he was waiting for a plane. On Tuesday, CNN Senior Media Reporter Oliver Darcy tweeted the news that CNN Pres. Jeff Zucker has announced that "the CNN Airport Network will end operations as of March 31."

"The steep decline in airport traffic because of COVID-19, coupled with all the new ways that people are consuming content on their personal devices, has lessened the need for the CNN Airport Network," Zucker says in a statement posted by Darcy.

“It’s truly a cancer on the body politic,” Levin wrote Friday while he was sitting in an airport where the CNN Airport Network was broadcasting to travelers:

1.      I’m sitting at the airport having to listen to the outrageous, constant propaganda of CNN.  It’s truly a cancer on the body politic.  It’s pushing hard impeachment and the 25th amendment.

2.      These are ignorant, irresponsible individuals who continue to foment anger. There’s absolutely no circumspection or self-policing.

CNN Airport Network has been broadcasting exclusively at airport gates, bars, food courts, and baggage claim carousels across the country for the past three decades.

News of its termination has been met with joy by conservatives reacting on Twitter, Fox News reports.