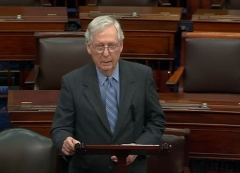 “A faction this desperate for unlimited, short-term power is a faction that must be denied it,” Senate Minority Leader Mitch McConnell (R-Ky.) said Tuesday, warning of Democrats’ push to “break the Senate” by eliminating the filibuster rule in order to pass their purely partisan legislation to seize control of elections.

Even though Majority Leader Chuck Schumer’s (D-N.Y.) push to change Senate rules appears to lack the Democrat support needed to succeed, it will still inflict long-term damage to the country, McConnell cautioned in a Senate floor speech:

“Voting to break this institution will not be a free vote or a harmless action – even if their effort fails.

“An unprincipled attempt at grabbing power is not harmless, just because it fails. Voting to break the Senate is not cost-free, just because a bipartisan majority of your colleagues have the wisdom to stop you.

“It’s amazing that our colleagues are this enthralled to radical activists.”

By obsessing over their quest for power, Democrats are refusing to help Americans deal with dangerous threats, such as the COVID pandemic and violent crime ravaging the nation, McConnell said:

“We have inflation, a pandemic, rampant violent crime, a border crisis – and, possibly, a war on the European continent.

“But, rather than work on any of that, Senate Democrats want to mar their own legacies with a reckless – reckless – procedural vote they know will fail.”

“A faction this desperate for unlimited, short-term power is a faction that must be denied it,” the Senate minority leader concluded.