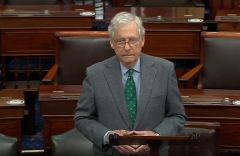 After the U.S. House of Representatives voted Wednesday to impeach President Donald Trump for a second time, U.S. Senate Majority Leader Mitch McConnell (R-KY) issued a “statement today regarding the Senate schedule,” declaring that there isn’t enough time to try Trump before Joe Biden is inaugurated.

“There is simply no chance that a fair or serious trial could conclude before President-elect Biden is sworn in next week,” McConnell says, adding that “This is not a decision I am making: it is a fact.”

The shortest impeachment trial in U.S. history lasted 21 days and the longest took 83 days, McConnell notes. Thus, he says, it would be better for Congress to use its time “a safe inauguration and an orderly transfer of power.”

McConnell’s full statement is presented below:

“The House of Representatives has voted to impeach the President. The Senate process will now begin at our first regular meeting following receipt of the article from the House.

“Even if the Senate process were to begin this week and move promptly, no final verdict would be reached until after President Trump had left office. This is not a decision I am making; it is a fact. The President-elect himself stated last week that his inauguration on January 20 is the ‘quickest’ path for any change in the occupant of the presidency.

“In light of this reality, I believe it will best serve our nation if Congress and the executive branch spend the next seven days completely focused on facilitating a safe inauguration and an orderly transfer of power to the incoming Biden Administration. I am grateful to the offices and institutions within the Capitol that are working around the clock, alongside federal and local law enforcement, to prepare for a safe and successful inauguration at the Capitol next Wednesday.”