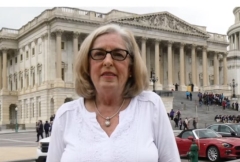 Veteran Investigative Reporter Penny Starr, who spent a decade with CNSNews.com exposing news that drove the national debate, died over the weekend, following a bout with cancer.

On Monday, Breitbart.com was the first to report of her death. She joined Breitbart in December of 2017, following ten years with the Media Research Center’s (MRC) CNSNews.com news division. When she joined CNSNews.com, she had more than 25 years of experience in print journalism.

“Penny was a tenacious investigative reporter with a knack for exposing stories of the utmost importance to everyday Americans. She was beloved by her colleagues for her infectious energy, zeal for supporting co-workers and passion for her craft. She will be dearly missed,” MRC President Brent Bozell said Monday.

Starr, who worked for CNSNews.com from 2008 to 2017, broke stories on issues still making headlines and deeply concerning Americans today.

On the cultural front, in 2010, Starr discovered that the National Portrait Gallery was hosting a Christmas-season exhibit featuring an ant-covered Jesus, male genitals, naked brothers kissing, men in chains, Ellen DeGeneres grabbing her breasts, and a painting the Smithsonian itself described in the show's catalog as "homoerotic."

Her story made national news and sparked such outrage from the American public and members of Congress that the Smithsonian removed the sacrilegious exhibit.

In 2015, Starr broke the news that the Obama Administration’s Health and Human Services (HHS) Department had issued a regulation directing that federal funds be used to provide abortions to unaccompanied illegal alien children.

Rationalizing the massive spending in the yet-to-be-passed Affordable Care Act (“Obamacare”) in 2009, then-Vice President Biden told an AARP town hall meeting that, “We have to spend money to keep from going bankrupt.”

Again, Starr was there to report the news, which was picked up and re-reported by media throughout the country. And, in 2021, after Biden became the nation’s commander-in-chief and began pushing his multi-trillion dollar spending plans, a flashback report of Starr’s story reminded the nation of President Biden’s long-held fiscal philosophy.

Today, a national debate rages over the Internal Revenue Service employing armed agents. But, back in 2012, Starr was already exposing how an unlikely arm of the federal government, the Social Security Administration, was planning to buy 174,000 bullets to arm its special agents.

Likewise, as Americans today face the danger of illegal aliens infected with the coronavirus breaking into the U.S. via the southwest border, in 2014, Starr reported a U.S. Marine general’s warning about illegal aliens bringing the Ebola virus into the country across the same border.

“Penny was a hard-working journalist and unabashed conservative. She wanted to make an impact with her reporting and the movement needs more like her,” former MRC colleague and current Fox News Digital freelance Opinion Editor Dan Gainor said Monday.