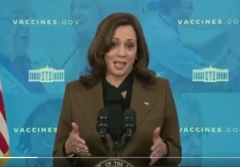 While 55.7% of Hispanics “believe the southern border should be secured and illegal border crossers returned to their country of origin,” just 32.6% of self-identified Democrat voters agree. Likewise, three-fourths (76.6%) of Asians, a 53.9% majority of Blacks and 71.3% of Whites say the border should be secured and illegal aliens deported. Ninety percent (90.0%) of Republican voters and two-thirds (67.3%) of all respondents agree.

Again, strong majorities of both Asians (75.3%) and Whites (59.7%) also believe lax border security is creating a drug problem, but just 25.2% of Blacks think Fentanyl coming in through the border from China is a deadly threat. Four of five (80.6%) Republicans and 56.3% of all respondents see a threat.

Nearly nine in ten (88.0%) Hispanics “believe police departments can be fully funded, prosecutors tough on crime, and officers who abuse their power properly disciplined,” compared to 58.4% of Democrats. Three-fourths (76.6%) of Blacks, 72.2% of Asians, and 80.1% of Whites say they have faith in law enforcement. In total, 80.1% of all respondents say the current system of law enforcement can work properly and should be supported. Fully 95.9% of Republicans and 80.1% of all respondents agree.