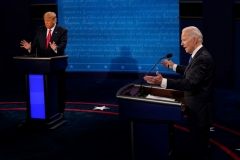 While a majority of Democrat voters want Pres. Joe Biden to run for reelection and most Republican voters want former Pres. Donald Trump to run in 2024, more Independent voters would rather see Trump than Biden on the ballot, a new Politico-Morning poll finds.

The national survey of 1,998 registered voters, conducted December 11-13, posed two separate questions, one asking if they believe Biden should run and the other if they think Trump should run.

Asked who they would like to see Biden replaced with as the Democrat candidate, if he doesn’t seek reelected, a third of Democrat voters chose Vice President Kamala Harris, three times the second-place candidate, Transportation Secretary Pete Buttigieg. Among Independent voters, just 20% pick Harris, even though she is their top choice.