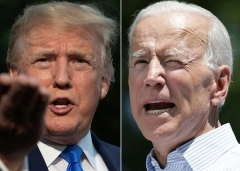 While 77% of voters at least somewhat approve of last week’s appointment of Maryland U.S. Attorney Robert Hurr to investigate Biden’s handling of classified documents found in his Delaware home and at a private D.C. office, Rasmussen reported last month that 50% said they approved of the appointment of Special Counsel Jack Smith to look into Trump. Smith was appointed to probe both Trump’s handling of classified documents found in his Florida home, as well as the former president’s efforts to reverse the results of the 2020 presidential election.

In the latest survey, conducted January 15-17, 2023, half (49%) say they “strongly approve” of the special counsel’s investigation of Biden and just 14% at least “somewhat” disapprove. Even 73% of Democrat likely voters and 66% of unaffiliated voters at least somewhat approve of appointing the special counsel.

In the same survey, 61% of voters said the investigation into Trump was probably politically-motivated, with 44% calling it “very likely.”

What’s more, according to last week’s survey, half of voters believe that Biden has committed impeachable offenses.

“How likely is it that, since he became president, Joe Biden has committed ‘high crimes and misdemeanors’ that would justify impeachment proceedings against him?” the survey asked.