NBC: ‘Jan. 6 Committee Has Some Work to Do’ as Belief in Trump’s Culpability Declines 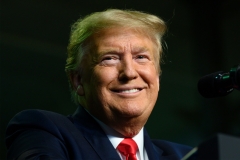 “It appears the House’s Jan. 6 committee has some work to do with the American public as it begins a new round of public hearings this week on its findings,” NBC News reported Monday, releasing the findings its national poll of U.S. adults conducted by Hart Research Associates/Public Opinion Strategies.

“Time has been on Trump’s side,” NBC News reported, noting a decline in the percentage of those who say former President Donald Trump is responsible for the January 6, 2021 U.S. Capitol riots, from a majority of 52% in January 2021 to 45% in its latest survey, conducted last month.

The steepest decline is in the percentage of adults who say Trump is “solely responsible” for the riots, from 28% in January 2021 to 17% in May 2022. The percent who believe Trump is “not really responsible” is up from 29% to 35%.

Respondents were not given the option of answering that the former president is “not at all responsible,” but they could answer that he is “solely responsible.”

As NBC News reports, the “erosion” in belief in Trump’s guilt is broad-based:

“The erosion in those holding Trump responsible for the attack has come across the board — among Democrats (who declined from 91 percent responsible in Jan. 2021 to 87 percent now), Republicans (11 percent to 9 percent) and independents (44 percent to 41 percent).”

On Thursday, June 9, 2022, the House Jan. 6 select committee will hold a prime-time, nationally-televised hearing, in an effort to convince the American public that Pres. Trump and some of his Republican colleagues in Congress are guilty of “a conspiracy to overturn the 2020 presidential election and block the transfer of power.”

"This is the only committee hearing I've ever seen in Congress where there was not an opportunity to cross-examine witnesses because there is no Republican on that committee who will do it," Jordan told "The Ingraham Angle."