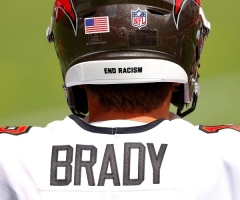 NFL end zones will be emblazoned with social justice messages again this season and players will be able to choose from six different calls for social justice to feature on their helmets.

"It Takes All of Us" and "End Racism" will be stenciled in end zones at all games for the second straight year as part of the NFL's Inspire Change campaign, the Associated Press reported on Thursday.

Players can choose from the following six social justice messages to wear on their helmets:

While on the sidelines, players and coaches will wear Inspire Change knit hats during weeks 17 and 18. The hats will also be sold to the public in order to help fund the campaign’s grant program.

“We are ramping up again in a big way with our social justice work” during the playoffs, Anna Isaacson, NFL senior vice president of social responsibility says.