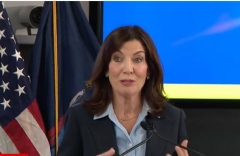 Wednesday, at a press event where Gov. Hochul touted her new gun control plans, WRGB News Anchor Anne McCloy asked Hochul if she had any numbers supporting the claim that concealed carry permit holders are the ones committing crimes:

“Do you have numbers to show that it’s the concealed carry permit holders that are committing crimes?

“Because the lawful gun owner will say that you’re attacking the wrong person, it’s really people that are getting these guns illegally that are causing the violence - not the people going and getting the permit legally. And, that’s the basis for the whole Supreme Court argument.

“Do you have the numbers?”

“I don’t need to have numbers” to justify her proposed gun control laws, Gov. Hochul replied:

“I don’t need to have numbers. I don’t have to have a data point to point to say this. All I know is I have a responsibility to people of this state to have sensible gun safety laws. And, this is one is not devised by the Hochul Administration. It comes out an administration from 1908.

I don’t need a data point to make the case that I have a responsibility to protect the people of this state.”

“Governor Hochul says she is aiming to pass bills Thursday that will add restrictions to a plethora of public places. Guns would be restricted in government buildings, courthouses, hospitals, schools and daycares. One of the most controversial aspects, Hochul says possession of a firearm at a private business would only be allowed if the business explicitly allows guns on the premises with a posted sign.”