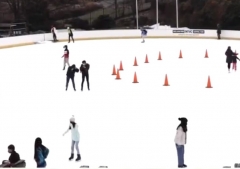 On Sunday, New York City overruled Democrat Mayor Bill de Blasio’s decision to close ice rinks in Central Park operated by an organization run by former Republican President Donald Trump, who was acquitted by the Senate of charges he incited an insurrection.

“The city is doing a full ‘180’ on its plan to shutter Trump-operated ice skating rinks,” The New York Post reports:

“City Hall on Sunday reversed Mayor de Blasio’s move to shutter Lasker and Wollman rinks in Central Park six weeks ahead of their typical April closing dates — in an effort to freeze-out his political rival.”

“The Wollman and Lasker rinks will stay open under current management for the few weeks left in the season,” the city said in a statement.

But, despite Trump’s acquittal of the charge, the City Council’s statement says Trump will never be forgiven for inciting an insurrection and the city will never again do business with him:

“But make no mistake, we will not be doing business with the Trump Organization going forward. Inciting an insurrection will never be forgotten or forgiven.”

“The stunning policy reversal came after devastated skaters fumed over the weekend that they shouldn’t be kept off the ice due to the mayor's beef with the Trump administration,” Fox News reports.