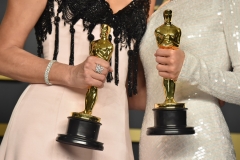 On Sunday, only 9.85 million viewers tuned in to see the 93rd Academy Awards show, down from 23.6 million in 2020, according to fast ratings reported by Variety.

Linking to Variety’s news on Twitter, Kelly asked Hollywood how it’s efforts to use every possible venue to inflict dour liberal propaganda on Americans, instead of to provide quality entertainment, are working out:

“Oscars Ratings Plummet by 58 Percent in overall, down 64% in younger audience”

As NewsBusters reports, Sunday’s Academy Awards show was loaded with pontification on liberal narratives and laden with race-baiting.

It began with an awards presenter praising the Black Panthers and preaching about a topical murder trial involving a Black man killed by a police officer and continued on through the night bludgeoning viewers with Black Lives Matter (BLM) propaganda.