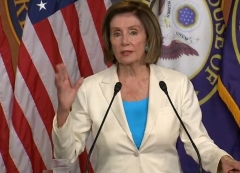 Announcing the creation of a Select Committee to investigate the breach of the U.S. Capitol on January 6, House Speaker Nancy Pelosi (D-Calif.) blamed the attack on attitudes of white supremacy, anti-Semitism and islamophobia.

Speaker Pelosi made the claim at her weekly Thursday press conference, where she announced the passage of H.R. 503 establishing the committee.

Pelosi said that the FBI and DHS have determined that domestic terrorists are a greater threat to the U.S. than are foreign terrorists, and attributed the attack on the Capitol to bigoted “attitudes” held by the protestors:

“It’s really important for you all to know what our purpose is for this.

“And, that is, the findings of the legislation speak to the testimony of the director of the FBI, when he basically said that there were more deaths from domestic terrorism than from global terrorism in our country in the previous year. Testimony from the Department of Homeland Security about concerns that are out there.

“All of these institutions talking about, well, I hate to even go there, but it is what they have said, in terms of white supremacy, anti-Semitism, islamophobia – all of these attitudes that have provoked – well, contributed – to what happened on January 6th.

“And, so that is our purpose. You can go to Speaker.gov to read the findings which establish the purpose of what we are setting out to do, to make sure that this never happens again.”

However, the comments from the FBI and DHS cited by both Pelosi and her legislation do not actually claim the January 6 attack on the Capitol was the result of these bigoted attitudes.

As Pelosi’s H.R. 503 legislation explains, the DHS bulletin is warning about the possibility that future violence by domestic violent extremists might be “emboldened” by the attack on the Capitol – and the comments by the director of the FBI were general observations about domestic extremism made last September, four months before the January attack on the Capitol:

Whereas on January 27, 2021, the Department of Homeland Security issued a National Terrorism Advisory System Bulletin that due to the ‘‘heightened threat environment across the United States,’’ in which ‘‘[S]ome ideologically-motivated violent extremists with objections to the exercise of governmental authority and the presidential transition, as well as other perceived grievances fueled by false narratives, could continue to mobilize to incite or commit violence.’’ The Bulletin also stated that—

(1) ‘‘DHS is concerned these same drivers to violence will remain through early 2021 and some DVEs [domestic violent extremists] may be emboldened by the January 6, 2021 breach of the U.S. Capitol Building in Washington, D.C. to target elected officials and government facilities.’’; and

(2) ‘‘Threats of violence against critical infrastructure, including the electric, telecommunications and healthcare sectors, increased in 2020 with violent extremists citing misinformation and conspiracy theories about COVID–19 for their actions’’;

Whereas on September 24, 2020, Director of the Federal Bureau of Investigation Christopher Wray testified before the Committee on Homeland Security of the House of Representatives that—

(3) ‘‘More deaths were caused by DVEs than international terrorists in recent years. In fact, 2019 was the deadliest year for domestic extremist violence since the Oklahoma City bombing in 1995’’