Pelosi: ‘I’m Not Going to Get Into’ Whether Constitution Bans Religious Tests for Supreme Court Nominees 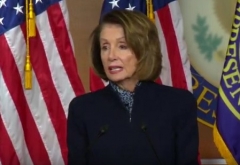 Asked whether the U.S. Constitution bans the Senate from scrutinizing the religious beliefs of Supreme Court nominees, House Speaker Rep. Nancy Pelosi (D-Calif.) said she wouldn’t “get into anybody’s interpretation” of the Constitution.

On Thursday – two days before President Donald Trump is expected to announce a Catholic judge as his nominee to replace deceased Justice Ruth Bader Ginsburg - Pelosi, who supports abortion yet purports to be Catholic, was asked by a reporter whether the Constitution’s ban on religious tests for office extends to Supreme Court nominees:

“Clause 3, Article VI, which bans religious tests from being the qualification for office, do you think that that should apply to Supreme Court nominees as well?”

“I'm not going to get into anybody's interpretation of one thing or another,” Pelosi replied.

“The confirmation is the work of the Senate, and I trust the judgment of our Democrats there to honor the Constitution,” she added.

Article VI, Clause 3 of the U.S. Constitution specifically refers to “all executive and judicial Officers” and states that “no religious Test shall ever be required as a Qualification to any Office”:

“The Senators and Representatives before mentioned, and the Members of the several State Legislatures, and all executive and judicial Officers, both of the United States and of the several States, shall be bound by Oath or Affirmation, to support this Constitution; but no religious Test shall ever be required as a Qualification to any Office or public Trust under the United States.”

Commenting on the clause, former U.S. president and Founding Father James Madison wrote that Congress is banned from applying and considering religious tests in the confirmation process of any “necessary officers,” as quoted in the University of Chicago’s “Founders Constitution” website:

“As to the religious test, I should conceive that it can imply at most nothing more than that without that exception, a power would have been given to impose an oath involving a religious test as a qualification for office. The constitution of necessary offices being given to the Congress, the proper qualifications seem to be evidently involved. I think too there are several other satisfactory points of view in which the exception might be placed.” - The Papers of James Madison.