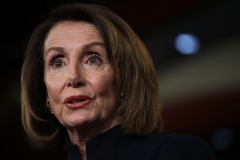 Reacting to the October report by the U.S. Bureau of Labor statistics showing the 23rd monthly record-high number of people employed (158,510,000) and 128,000 additional jobs in the U.S., Pelosi issued a statement declaring the October news “further evidence” of “broken promises and an underperforming economy”:

“The October jobs report offers further evidence that the Republicans’ disastrous special interest agenda is hollowing out the middle class while enriching the wealthy and well-connected.  Clearly, the GOP Tax Scam has left our country with nothing but broken promises and an underperforming economy.”

Democrats, however, are “working to give Americans the economic security they need,” Pelosi said, promoting her party’s health care, price control, and wage control agenda:

“The Democratic House is working to give Americans the economic security they need to grow and thrive.  We have sent the Senate bold, decisive legislation to lower health care costs and raise wages for millions of Americans.  Now, Democrats are advancing H.R. 3, the Elijah E. Cummings Lower Drug Costs Now Act, transformative legislation that will lift the crushing burden of unfair drug prices on American patients, taxpayers and employers and put money back into the pockets of seniors and families.  Republicans must put American families first and join us to enact this critical legislation.

“Democrats will never stop fighting For The People to lower the cost of health care and protect people with pre-existing conditions, to raise wages by rebuilding America with resilient, modern, job-creating infrastructure and to clean up corruption to ensure Washington works for everyone."