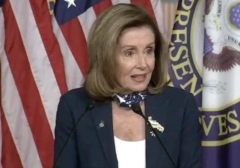 “I’ll let you know as soon as I wish to,” House Speaker Nancy Pelosi (D-Calif.) said Thursday, flippantly dismissing a reporter’s question about the challenges of crafting a version of Democrats’ Build Back Better legislation that she can quickly bring up for a vote.

At her weekly press event, a reporter began by asking Pelosi if her party’s infrastructure bill would be brought up for a vote Thursday evening, to which she replied, "No" it would not:

Reporter: “Madam Speaker, could you just project this week a little bit, what you expect?  Do you expect to vote tonight?  And is it possible that you might just vote on the infrastructure bill considering everybody seems to be bought in and saying it's ready for a vote?”

Then, when the reporter followed up by asking her for details about the timing and hurdles of her Build Back Better bill, Pelosi responded that she wouldn’t answer him until she felt it:

Reporter: “Okay.  So, do you anticipate a vote on the Build Back Better today, and what are the big hurdles you have to overcome?”

Speaker Pelosi: “I'll let you know as soon as I wish to.

“You're just worried about your own schedule.  I know.  I know that.

“But the fact is, is that our Members are engaged in very thoughtful deliberation with each other.  As I said to you before, 90 percent of this bill has been agreed to – House, Senate, White House – and written.  We made some changes since last week.  People need to familiarize themselves with it.  That was the purpose of our meeting this morning.  As I said, it made me very proud.  I was inspired by just, once again, hearing the depth of knowledge and breadth of vision of our colleagues.  And we'll let you know.

“I think many of you know I was really very unhappy about not passing the BIF last week.  I really was very unhappy because we had an October 31st deadline, and I thought that that was eloquent, but not enough, I guess.  So, now we're going to – we're going to pass both bills, but in order to do so, we have to have votes for both bills.  And that's where we are.”

This isn’t the first time Pelosi has refused to provide details about controversial Democrat legislation, as CNSNews.com has previously reported:

“As House Speaker in 2010, Rep. Nancy Pelosi (D-Calif.) famously said of Obamacare, "we have to pass the bill so that you can find out what's in it." This week [Oct. 10, 2013], when asked whether she has read the 10,535 pages of Obamacare regulations published in the Federal Register, she wouldn't answer.”