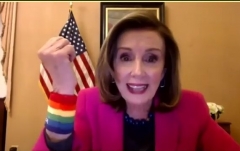 The Donald Trump voters who aren’t domestic terrorists, white supremacist, anti-Semites or xenophobes, voted for him because they fear “all this diversity coming in” to the country, House Speaker Nancy Pelosi said in an interview with Tufts University this week.

Asked “What is his appeal to so many Americans?” Pelosi characterized one “bucket” of Trump’s supporters as domestic terrorists and racists:

“First of all, there is an element of his support that we will never get, that we will not reach out to, and we saw a lot of them of the steps of the Capitol: people engaged in domestic terrorism, and the main bucket according to the head of the FBI of that domestic terrorism motivation is white supremacy, anti-Semitism and xenophobia, etc.”

“Then, there are those who are voting and who respects the concerns that they have,” Pelosi said, attributing the rest of Trump’s support to a fear of different types of “diversity,” ranging from women to immigrants to LGBTQ Americans:

“I believe that, in ’16, there was a decision that people made. If they believed that there was a place for them and their family in the future, they probably did not vote for him. Maybe some did, with the tax cuts and all that. But, by and large. But, if people saw a place for themselves and their family in the future, they were more likely not to vote for him as I said.

“And what were their fears? Their fears were automation, immigration, globalization, just diversity, just women, LGBTQ – all this diversity coming in, and was that crowding them out?

“And, that is most unfortunate, because all of those things should have been viewed more as opportunity, that it wasn’t their fault, that it wasn’t.”

This group was duped by Trump, who made promises he had no intention of keeping, Pelosi concluded:

“So, along comes somebody just selling a bill of goods, not really intending to deliver on it, not really knowing exactly what to do about it, except to misrepresent.”