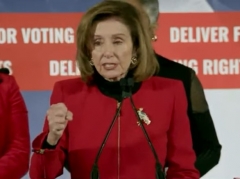 American democracy can’t be confined by a lack of bipartisanship, if partisan power is the only way to pass Democrats’ voting reform legislation, House Speaker Nancy Pelosi (D-Calif.) declared Monday.

Using the Martin Luther King, Jr. holiday to demand passage of Democrats’ legislation to outlaw voter integrity measures and federalize elections by seizing control of elections from the individual states, Speaker Pelosi called on her colleagues to abolish the filibuster rule so that Democrats can pass laws without the support of a single Republican.

Pelosi said that everyone should want bipartisanship – but, when Democrats can’t have that, democracy shouldn’t get in the way of fulfilling their agenda, because "We have to get this done":

“We have to get this done and the truth is our that colleagues, House and Senate, Democrats and Republicans, must weigh the equities here.

“While it may be true to them that the filibuster is an important custom, it is not the Constitution of the United States, the truth is. And the truth is that the Constitution says only if you’re ratifying a treaty, convicting an impeached person or ratifying the Constitution, a simple majority. That is why the vice president can break a tie, 50-50. We want all of them in the Senate to weigh the equity. We all want bipartisanship; we all strive for it; have a responsibility to do so.

“But, when we cannot have it, we cannot confine our democracy to what might be 'bipartisan-ly' possible. So I asked our colleagues in the Senate, respectfully, for what they think filibuster means, to compare that, to weigh the equities against our democracy, because nothing less is at stake than our democracy.”

“We must weigh the equities here,” Pelosi said, accusing Republicans of trying to suppress the vote, nullify elections, and create “obstacles to participation” by supporting election laws designed to prevent voter fraud.