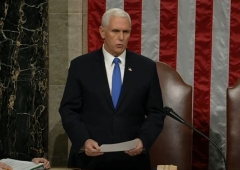 Addressing an event at Saint Anslem College’s New Hampshire Institute of Politics, Pence denounced the Biden Administration’s “Big Government socialism” and “left-wing climate” policies, and decision to more than double the size of the IRS:

“In the midst of all of that, I’m sure you’ve all heard, they’ve also authorized the hiring of 87,000 IRS agents. You know, when Ronald Reagan spoke in 1964, about a little intellectual elite in a far-distant capital, who thought they could plan our lives better than we could plan them for ourselves, he could scarcely imagine the Big Government socialism or the left-wing climate agenda that’s being implemented in Washington, DC today.”

“American freedom is under attack as never before” because out-of-touch ruling elites and government, aided by large corporations, are working to enforce “a pernicious woke agenda,” Pence warned:

“American freedom is under attack as never before. Big Media, Big Government, even Big Business have locked arms to enact a pernicious woke agenda designed to control the American people and destroy the American Dream.

“The ruling elites in Washington have never been more out of touch with the values and ideals of everyday Americans.”