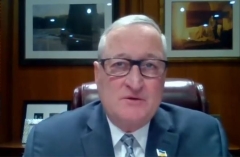 Overwhelmed by illegal immigrants, due to the Biden Administration’s open-border policy, Gov. Abbott has been sending the migrants to non-border sanctuary cities across the U.S. where, the cities claim, illegal aliens are welcome.

When Gov. Abbott sent illegal immigrants to posh Martha’s Vineyard in liberal Massachusetts, however, local authorities immediately declared a “humanitarian crisis” and shipped the migrants to a military base.

Kenney also called it “sad and outrageous” and “cruel and racist” for Gov. Abbott to continue sending illegal immigrants to sanctuary cities, like his, where they are presumably welcome:

“It is sad and outrageous that Governor Abbott and his administration continue to implement their cruel and racist policies, using immigrant families, including children, as pawns to shamelessly push their warped political agenda.”

In a Tuesday statement, Gov. Abbott promised to continue sending illegal immigrants to more and more sanctuary cities “until the Biden Administration does its job”:

"Until the Biden Administration does its job and provides Texans and the American people with sustainable border security, Texas will continue doing more than any other state in the nation's history to defend against an invasion along the border, including adding more sanctuary cities like Philadelphia as drop-off locations for our busing strategy."