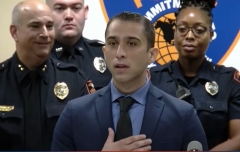 Former New York Police Department Officer Matt Spoto says he was shocked to learn that he won’t have to be ashamed to park his police vehicles in front of his home now that he’s joined the Lakeland, Florida police force.

On Tuesday, Florida Governor Ron DeSantis (R) held a press conference to announce a proposal to give $5,000 signing bonuses to new law enforcement officers in his state – and to introduce officers who have relocated to Florida from other states where police have been vilified and defunded.

The anti-police sentiment was so hostile that he even had to lie about his profession and tell people he was a bartender when he worked for the NYPD, Spoto told reporters:

“They were doing a recruitment process in, I think, Times Square. I just happened to be there when I went there for a training that I was there for. So, I stopped by. I sat down with a dedicated team, background investigators in the Lakeland Police Department.

“He’s telling me a little bit about life in Florida. I mean, it was an eye-opener. He said that you could park your police vehicles in front of your house. And, to me, I thought that was mind-blowing.

What’s more, the laws and resources in New York actually prevented him from being able to help people, Spoto said:

“When I was there, I realized very quickly that the job was not what I expected, only because I wanted to do all these things to help people – and the tools and the laws that were set in front of me did not allow me to do so.”

Spoto concluded by expressing his gratitude for the opportunity to join the Lakeland Police Department and serve a community that actually appreciates his work:

“I think everybody, regardless of the career that you chose, you want to be appreciated in what you do. It doesn’t matter what job you do. So, I knew as soon as I saw the governor making all these strides to bring all these law enforcement officers down here, I knew this is where I wanted to be.”