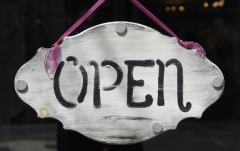 More U.S. likely voters say it’s “time for America to get back to work” despite the COVID-19 pandemic, but that plurality is driven by conservatives, results of a national Rasmussen Reports survey released Monday reveal.

Liberals and women are also more likely to be afraid they’ll contract coronavirus if they return to work than are conservatives and men.

On Monday, CNSNews.com reported that Evangelical leader Rev. Franklin Graham is warning that the liberal media are stoking fear among the public in order to destroy President Donald Trump:

Evangelical leader Franklin Graham criticized the "left-leaning media" for using the worst-case coronavirus incidents to spread fear among the public and to repeatedly attack President Donald Trump, who they are fixated on destroying.

"Many in the left-leaning media want to project the worse-case scenarios relating to COVID-19," said Rev. Graham in a May 2 post on Facebook.  "It makes great headlines for them -- and it produces fear in the public."