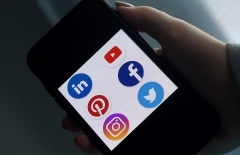 More than twice as many likely voters want social media platforms, like Facebook and Twitter, to allow free speech by users as want them to regulate what is posted, a new national survey by Rasmussen Reports reveals.

While 54% say social media platforms should “allow free speech without interference,” only 26% say they should “regulate what is posted to make sure people are not offended,” the survey conducted May 28 and 31, 2020 finds. Another 20% aren’t sure which is better.

Although conservatives are more likely than either moderates or liberals to choose the “free speech” option, more of each ideological group want free speech than want regulation. Among conservatives, 68% want unrestricted free speech, 21% want censorship of content that might offend, and 11% aren’t sure.

Only 28% of likely voters believe the operators of social media platforms like Facebook and Twitter “edit their content in a fair and balanced way,” while 50% say they “are politically biased in the decisions they make.” Another 22% aren’t sure.

Nearly three-fourths (72%) of conservatives say social media platforms practice bias in their editing decisions, compared to just 39% of moderates and 29% of liberals.

Older voters are more likely to perceive social media bias than are younger voters. By age group, the percentage saying social media editors are biased falls from 57% of those 65 and older, to 51% of those 40-69, to 45% of those under 40 years old.

The survey also asked voters if they favor a proposal to lift the legal protections social media currently enjoy, by virtue of the concept that they are merely platforms for free speech, and make them “legally liable for posts on their sites” if they choose to regulate what users are allowed to say.

A plurality (43%-33%) of all likely voters oppose removing these protections (24% unsure), though conservatives are evenly split (39% favor, 39% oppose, 22% unsure). Among moderates, 48% oppose removing immunity from liability, 30% support the proposal and another 22% are unsure. Liberals oppose, rather than support, lifting protections, 46%-29%. Twenty-six percent of liberals are unsure whether or not they like the idea.