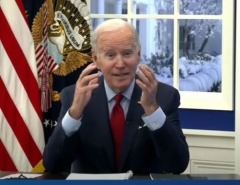 President Joe Biden repeatedly promised his audience that he was being truthful on Tuesday, when he addressed a South Korean-owned computer chip manufacturer in Bay City, Michigan.

On 29 occasions during his speech, Biden reassured those in attendance either that “I mean it,” it’s “not a joke,” it’s “a fact,” or he was “serious” about what he said.

Four of his comments were “not a joke,” Biden explained.

Nine times, Biden declared that he was providing a “fact,” including three times he doubled down on the claim.

Biden said that three of his comments were “serious.”

On multiple occasions, Biden used more than one of the reassurances in the same sentence, such as when he declared union workers to be the world’s most highly skilled and trained:

“Union workers are the most highly trained, highly skilled workers in the entire world. That’s not a joke; that’s a fact. That’s a fact.”

Once, Biden was able to work three of the guarantees into the same comment – but, he didn’t say he was actually “serious”:

“My dad used to have an expression, and I mean it sincerely. Matter of fact, it was quoted to me today by one of the congressmen. He used to say, ‘Joey, a job is about a lot more than a paycheck. It’s about your dignity. It’s about your place in your community.’ Literally. Not a joke.”

The focus of Biden’s speech was his administration’s plans to improve the economy, create good-paying jobs, and make the U.S. the world’s economic and supply chain leader:

“[T]he rest of the world views the United States as better positioned than any other nation — any major nation in the world to lead the world economy in the 21st century. And that’s not a joke.”