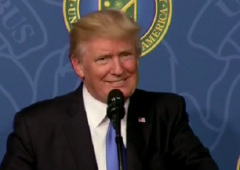 Voters under 40 years old are the only age group to think President Donald Trump won last Tuesday’s presidential debate with Joe Biden – and they’re, by far, the most likely to say the debate changed their mind about who they’re voting for, results of a new Rasmussen survey reveals.

Younger voters were also far more influenced by the debate than were all voters nationwide who watched the debate. Asked if the debate changed their mind about who they’ll vote for, 24% of voters under 40 said, “Yes” – almost double the 13% national result.