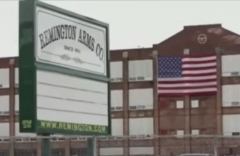 Republican Georgia Governor Brian Kemp announced Monday that America’s oldest firearms manufacturer, Remington Firearms, will locate its global headquarters from New York to Georgia and open both a manufacturing operation and a world-class research and development center in LaGrange, Georgia.

The company will invest $100 million and create 856 jobs over a five-year period in Troup County, Kemp said in a statement.

"Georgia's firearms industry is responsible for thousands of jobs and millions of dollars of investment in our communities.

“I am a proud owner of some of Remington's first-class product, and now, I am excited to welcome them to their new home in the Peach State. As yet another big manufacturing win for our state, I look forward to seeing the oldest firearms manufacturer in America thrive in Georgia's pro-business environment."

Founded in 1816, Remington Firearms is one of the United States’ largest domestic producers of shotguns and rifles.

"We are very excited to come to Georgia, a state that not only welcomes business but enthusiastically supports and welcomes companies in the firearms industry," Remington CEO Ken D’Arcy, RemArms said, touting the state’s business-friendly environment:

"Between the support we’ve received from the state and from Scott Malone and Kelley Bush of the City of LaGrange Economic Development Authority, we cannot wait to expand our company in Georgia. Everyone involved in this process has shown how important business is to the state and how welcoming they are to all business, including the firearms industry."

Remington is just the latest gun manufacturer to flee an anti-gun, business-burdensome state to relocate in a more hospitable southern state.

Last month, as CNSNews.com reported, iconic gun manufacturer Smith & Wesson announced that, after more than a hundred and fifty years in Massachusetts, it is moving its headquarters to Tennessee in order to escape new anti-gun legislation that would cost the company approximately sixty percent of its annual revenue.

Smith & Wesson had “no choice but to relocate,” CEO Mark Smith said in a statement:

“In order to preserve future jobs and for the viability of our business in the long term, we are left with no choice but to relocate these functions to a state that does not propose burdensome restrictions on our company."

Smith & Wesson President and Smith attributed the move to Massachusetts lawmakers’ legislation that would outlaw manufacture of products vital to the company’s survival:

“These products made up over 60% of our revenue last year, and the unfortunate likelihood that such restrictions would be raised again led to a review of the best path forward for Smith & Wesson."

As The Washington Examiner reports, two other gun manufacturers have decided to move to southern states warmer to their products: