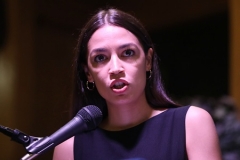 The tweets, writings and photos by people who are guilty of “complicity” with President Donald Trump will be deleted, Rep. Alexandria Ocasio-Cortez (D-NY) predicted on Friday.

As Democrat Joe Biden appeared to close in winning the presidency, Rep. Ocasio-Cortez posted a cryptic tweet suggesting that those who supported Pres. Trump will try to deny their “complicity.”

Ocasio-Cortez implied that an archive of “Trump sycophants” should be created, so that they could be held accountable for supporting the president – and that their past speech will, somehow, be “deleted” – regardless of whether they expressed themselves through social media, writings, or photographs:

“Is anyone archiving these Trump sycophants for when they try to downplay or deny their complicity in the future? I foresee decent probability of many deleted Tweets, writings, photos in the future”

If Ocasio-Cortez was referring to censorship of previous speech, rather than an attempted cover-up by those who expressed support for Trump, her prediction may already be coming true.  As CNSNews.com reported on Friday, 7 of Pres. Trump’s 16 tweets of the past 24 hours were hidden by Twitter:

“Several of the suppressed tweets were video clips of President Trump's news conference on Thursday evening, where he discussed the problems he sees with the ballot counting and alleged fraud.”