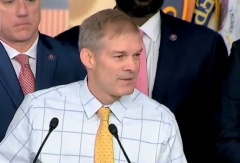 Every time their attempt to dismiss the Hunter Biden laptop scandal is disproved, Democrats and their media cohorts simply change their claims to continue trying to defend President Joe Biden and his son, Rep. Jim Jordan (R-Ohio) said Thursday, recounting how the liberal narrative has morphed over time.

At a press conference detailing the issues Republicans plan to investigate once they take control of the House, Rep. Jordan retraced the history of how liberals’ talking points have changed since The New York Post first broke the Hunter Biden laptop story (which was quickly suppressed on social media) just weeks before the 2020 presidential election.

“Never forget how the story has changed. I mean, think about this,” Jordan began:

“Then, it was, ‘Well, it’s his laptop, but, remember, it’s Russian disinformation and no one did anything wrong.’

“Then it was, ‘Well, maybe, maybe he did something wrong, but President Biden didn’t know about it.’

“And now, it’s ‘Well, maybe President Biden knew about it and was involved, but it didn’t influence his decisions.’

“In fact, yesterday, there was a story in Politico which said that.

“The story in Politico yesterday, ‘Investigating the investigators: Dem strategists to launch counterpunch to House GOP.’

“The story in Politico yesterday, here’s what it said in there, quote: ‘No evidence has publicly emerged that Joe Biden’s decisions were affected by his son’s business dealings.’