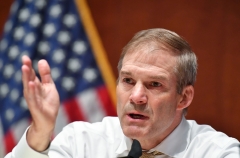 Asked how Republicans can stop President Joe Biden’s new “Disinformation Board” from robbing Americans of their First Amendment right to free speech, Rep. Jim Jordan (R-Ohio) said Friday that they’ll have one means - if they gain control of the U.S. House in November.

The Department of Homeland Security’s new “Disinformation Governance Board” is being widely criticized for being a tool for Democrats and President Joe Biden to suppress and punish any speech that refutes, or disagrees with, their agenda. And, the person tapped by Pres. Biden to head up the Disinformation Board has been accused of peddling partisan, leftwing disinformation.

In an interview on “Mornings with Maria,” Host Maria Bartiromo asked Jordan what Republicans can possibly do to prevent the Disinformation Board from limiting free speech.

Republicans will have to win, at least, the House of Representatives in November, Rep. Jordan replied. If they do, then they’ll have on arrow in their quiver – money – Jordan explained:

“And, you tell Chuck Schumer and you tell the White House – if the Republicans are in control of the House or in control of the full Congress – we’re not going to pass the appropriations bill, unless that language is there, because we’re going to protect the First Amendment.”

But, even if Republicans take back the House and Senate, they’ll still have to have the backbone to use their leverage, Rep. Jordan said:

“That’s the only – that’s the leverage that we have – and, we’re going to have to be willing to use that – if, in fact, the American people put us back in control, which I think frankly, they’re getting ready to do that.”