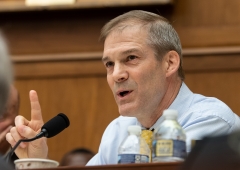 Rep. Jordan tweeted quotes from the two presidents on the subject of “help”:

President Reagan: “The nine most terrifying words in the English language are: I'm from the Government, and I'm here to help.”

President Biden: “Help is on the way.”

“More help is on the way, for real,” Biden declared on Monday, kicking off his “Help Is Here” tour celebrating Democrats’ $1.9 trillion “American Rescue Plan,” billed as a COVID-19 relief measure, at a stop in a Philadelphia, Pa. suburb:

“Initially, at the very beginning of the Paycheck Protection Program, you'd go to a big bank, they'd say, ‘Do you have an account with us? Have you borrowed money from us? Do you have a credit card from us?’ They didn't want to deal with people who were on the short side of things. But, you've really made it work.

“And I think you should be aware: More help is on the way, for real.”

But, as Pres. Reagan famously told a press conference back in 1986, Americans should be terrified of any promise of government “help,” since it inevitably does more harm than good:

“Some sectors of our farm economy are hurting, and their anguish is a concern to all Americans. I think you all know that I've always felt the nine most terrifying words in the English language are: ‘I'm from the government, and I'm here to help.’

“A great many of the current problems on the farm were caused by government-imposed embargoes and inflation, not to mention government's long history of conflicting and haphazard policies.”