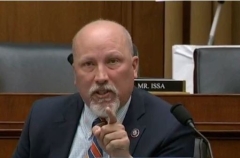 Rep. Chip Roy (R-Texas) checked off a list of how Democrats’ “Inflation Reduction Act” will hurt the American people – and dared Democrats to campaign on the bill’s harmful provisions – during a House hearing on Friday.

“My Democratic colleagues own this bill; let’s be clear,” Rep. Roy said, introducing a list of ways the bill targets American citizens:

“$80 billion to the Internal Revenue Service to go after those Americans, to hire agents, jobs already posted: ‘check.’

The Democrats’ are proud of how their bill is “screwing over the American people” with increased taxes, audits, and energy prices - so, that’s what they should campaign on - Rep. Roy said, “congratulating” them for ramming the bill through the House:

“My colleagues now today are going to dump hundreds of billions into corporate America, screwing over the American people every single day with tax audits, increased energy prices and increased taxes.”

“Congratulations - take that to the polls.”